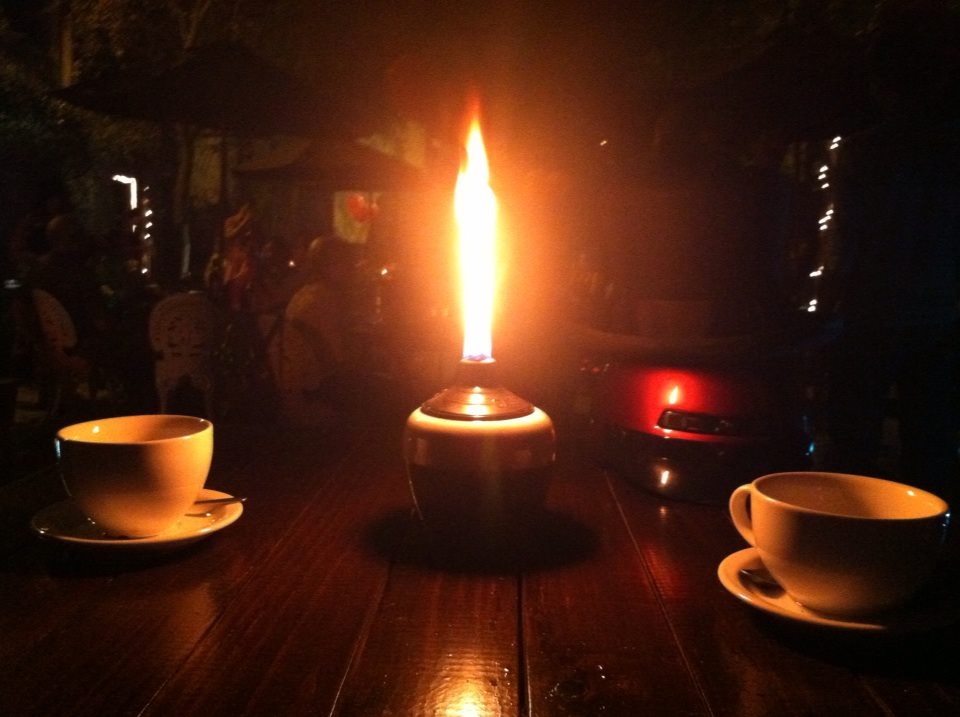 Just before Kirra left off for 2013 summer break, two new developments graced my life. Firstly, I was Fired from Fire Street Food. As were nearly all non-Asian people at the time, which was interesting. Subsequently, I was then hired at a historic inn, which seemed to suit me– and my wallet– much better. Secondly, I upgraded my half-dead Mitsubishi to a brand new moped. It was a rather forced decision as well, given the wreck that had totaled my car. But it was legally declared the other driver’s fault.

The purpose of explaining this development was to detail how exactly I’d explored all of Savannah within that one summer Kirra was gone. Most of my days were spent in air-conditioned cafes, suited in ruffles, as I typed away at my stories. I think a good two months of all this was essentially that scene from “The Great Gatsby” where Nick Carroway describes himself as being ‘within, and without.’ Depersonalization was like a high to me. I never did feel solidly attached to my body, and I basked in that fact.

I tried new restaurants, I breathed deep every corner printed on a postcard, raced my shadow on foggy nights, fell in love with romanticism itself. I visited museums, attended plays, took pictures of the numerous architectural marvels. By the time Kirra came back, I was ready to unleash the charm that all of my knowledge of downtown had. I was quite forgetting of the fact that I found Kirra annoying. Much like Gatsby, I may have been more in love in what she symbolized to me, than her herself.

I had, after all, done the impossible and conquered Savannah just for her. She was proof that I’d achieved the near-impossible. And thus, we would rule Savannah side by side.

When she came back in early September, I spent much of it helping her move her many items into SCAD’s shoebox-sized excuse for a living space. Then, on September 13th, we had our first date. Her arms gripped my waist from behind as we rode to a café I’d discovered; I remember how impossibly warm that made me feel. We arrived at Foxy Loxy and had candlelit tea in the courtyard. I remember being happy.

That kicked off the first two or so months of a relatively good relationship. I think. Come to think of it, the only other one I’d had to compare to is the previous one where my lover had literally died, so my standards were probably a bit low. But I was happy enough.

I went to my first ever anime convention with her that year. I’d had blurred memories of Neb’s con days. Of Kirra being unable to find a pair of sandals and throwing things at Neb for daring to exist too close to her without having the omnipotence to solve her problems. Also of Kirra cursing Neb out for having the audacity to ‘abandon’ her at one con. Despite having no set plans to hang out, Neb’s brief greeting was absolutely lacking in what Kirra clearly required. But that happened to Neb, yes? This would be different. I was different. Plus, Mr. Fedora and Mall Goths One and Two were going with us, and Kirra always seemed more reasonable with some buffers. Needless to say, this was to be my last convention.

So, to start it off, Kirra and company was five hours late in picking me up. Here’s a picture of me, bored as fuck, being updated that Kirra was trying to find all six of her cosplays at the very last minute.

On the way there, Mr. Fedora almost drove us and his egregious van into the ditch. I noted with surprise that we were taking Kirra’s dog, a young Shiba Inu we’ll call Hoshi, because she basically was. Kirra was allowed to have this dog in the uni dorms because she was supposedly a service animal. Who was trained once. And didn’t actually do her job. Because Kirra would actually need to keep training her for that to work. So, she was as stubborn and ill-trained as any other shiba under a year old. Why the fuck Kirra was trying to bring her along– Oh right.

She’s a dog. Dogs can’t survive in a dorm on their own for two and a half days.

When we arrived at the hotel, Kirra announced that she couldn’t find her phone. Maybe it was the injuries sustained from the last time Kirra had lost something during a convention, but my stomach twisted at the notion. Even moreso when Kirra went downstairs with Fedora, came back up with her retrieved phone, and held it up for all to see the shattered screen.

So, that’s the note on which this began.

Oh, and Hoshi got excited and piddled on the bed the first night. Not willing to be charged for damages by calling to the front desk, Kirra just suggested that we still… sleep there. Just try to stay away from the wet spot. The next day, the dog that Kirra wisely locked in the bathroom, decided to respond by clawing the top layer of wood from the door.

Oh, it gets worse. See, I’ve heard rumours that people do things at cons. Apparently, there are panels for voice actors? There are games? Something about a rave? People even take advantage of the hotel pool and all?

There’s other things to do rather than walk in circles for ten hours a day in cosplay and make critical commentary on the cosplays of others?

I wouldn’t have known.

From about 10am to 1am, we would wake up, dress, and walk in a circle-8 in Anime Weekend Atlanta in a slow, tedious stroll. I called it the ‘Weeaboo Death March.’ Goth One, Goth Two, and even Fedora had better things to do. Kirra’s comments didn’t tend to vary, much.

“Look at that girl. Oh, yeah, show off your boobs, that’s why everyone’s wanting pictures of you. Ugh.”

“The only reason that he’s getting so much attention is that he decided to dress from something popular. No one even knows what my character’s from! If they did, they would Love mine!”

“Ugh, that cosplay isn’t even accurate.”

We did get to do a Black Butler photoshoot. Mainly because myself in my blue hair and my normal attire were mistaken as Ciel Phantomhive. Which, fair enough.

Towards the end, I was feeling fatigued and was dealing with some unrelated health issues at the time. Kirra was… playing dead.

This lasted for about an hour and a half. Kirra had a key to the hotel room. I didn’t. So, ailing, uncomfortable, and bored out of my skull, I sat next to her and mused, ‘I wonder what Hoshi’s up to.’ ‘I wonder if the pool is still open.’ ‘How long do you think we can order room service for?’

Surely she didn’t need to be there from when the con opened until it closed, right?

Seeing through my transparent attempt to end this bizarre ritual, Kirra said flatly, “You keep hinting that you want to go back to the room and I don’t.“

I sat, scrolling in silence next to this faux-dead anime character when she finally decided to go back.

I honestly don’t remember the next day. I hope one of my alters took pity on me and took over. I do distinctly remember staring at a highway, crossing from the hotel to the convention centre. I witnessed a squirrel meeting its grizzly end via a car. I remember muttering, “Lucky bastard.”

Kirra asked me to repeat myself.

That Sunday, checkout was at either 10am or 11am. There was the matter of Hoshi. Kirra just couldn’t bear to give up half a day of wandering aimlessly in the halls for stranger’s approval. She also didn’t want to, you know, take her service dog with her. It might ruin the cosplay.

It’s alright, though. She had a solution.

“We can just leave Hoshi in the car. It’ll be fine. We’ll leave it in the shade.”

We were in Atlanta. Atlanta. In September. It was easily 90 degrees, outside of a car. While the rest of us stared at Kirra in speechless horror, Goth #2 spoke up. “I can just walk Hoshi around in the parking lot for a while.”

Thank gods for Goth #2. She stayed out there until probably about 3pm, when Kirra finally got bored, we left the con.

Consider this an epilogue.

The next year, Kirra was adamant about going to the con. Sans Fedora Man and his Wonder Van, Kirra had the bright idea of using her driving permit to drive them all from Savannah to Atlanta. For those unfamiliar, those with a permit have to be accompanied by a licensed 21 year-old. I was just 21 that year, but I would’ve rather died than go to that con.

Especially when Kirra said, ‘I don’t care if we have to sleep in the car for the weekend, we’re going to that con!”

I got my boss to write me a somewhat falsified note saying that I had indeed asked for that weekend off, but couldn’t attend. I paid my portion of the hotel bill, but spaced on one crucial detail.

Kirra and her friends were all under 21, and none were licensed. In my catastrophizing mind, Kirra was going to be pulled over, jailed, and kicked out of uni, and shipped back to Ohio in a cage. I wrote a panicked post on social media, pleading someone over 21 to take a free trip to Atlanta.

Meanwhile, Kirra thought it was the deepest injustice in the world that I would be forced to work during Anime Weekend Atlanta. “You should quit! This is why they have unions! You need to file a complaint.”

Someone by the name of Alia took the bait, and then had this to say about it through text. “I have never met someone so high-maintenance. She is like the Bridezilla of cosplay. Hoshi isn’t trained like a service dog. She’s not even trained to pet standards, much less service dog standards. But I’m at the hotel with her because I’d rather spend time with one bitch than another.”

I remember reading that when I was at a bar with my now best friend, Cotton.

Then I ordered another drink.

But this was just one stressful weekend, yeah? It wouldn’t be the rest of the relationship. Right?

iThere are no comments